1. Acadian arrived this afternoon and tied up at Imperial Oil.
Irving Oil manages to get along with only one Canadian flagged tanker these days. Acadian roams the eastern ports of Canada including St.John's, NF, Charlottetown PE and points between, from Irving Oil's base in Saint John, NB.
Built by Hyundai Mipo in Ulsan, South Korea in 2005 the ship is actually owned by FB Tankships I Ltd of Barendrecht, Netherlands, part of the Vroon group of companies. It is chartered to carry Irving Oil products, and is registered in Canada. Its three identical sisterships Nor'Easter, New England and Great Eastern fly the flag of Marshal Islands flag and trade from Saint John, generally to US ports, never running between Canadian ports.
The ship is 23,356 gross tons, 37,515 deadweight - a sizeable ship for a coastal tanker.
At one time Irving Oil was a major tanker operator with more than half a dozen ships trading domestically, others in foreign trade and several tanker barges. Such are the changes in distribution systems (essentially better highways and arrangements for product swaps with other refiners) and the expansion of Irving's business south of the border, that a large tanker fleet is no longer needed. More than that there is no apparent need to actually own the tankers either, hence the charter deal with Vroon.
In 1977 among the several tankers Irving operated were two small ships that accessed many out of the way ports on the St.Lawrence River and in Atlantic Canada: 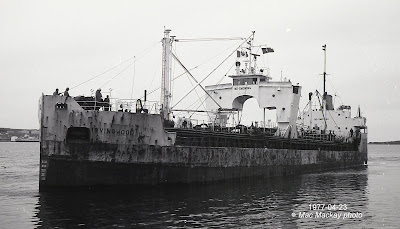 2. Despite is scruffy look in this picture, Irvingwood survived another ten years in Irving ownership.
Irvingwood was built in 1952 by Geo. T.Davie & Sons of Lauzon, QC as a bulk pulpwood/steel and grain carrier. It was built to fit the old St.Lawrence Canals and measured 2,491 gross tons on dimensions of 259'-11' x 43.8'. On February 16, 1957 it arrived in North Shields, England [Imagine for a moment crossing the North Atlantic in winter in that ship!] for conversion to a tanker by Smiths Dock Co Ltd. When it emerged is overall dimensions were unchanged but it measured 2,353 gross tons. The strange looking wheelhouse, built to provide clearance for a travelling crane, was not modified. The ship travelled near and far, even to the Arctic in the 1959 northern supply mission. It lasted to 1987 when it was broken up at Point Edward, NS.
It was powered by a war surplus GM Cleveland engine of 16 cylinders and 1600bhp. It was re-engined in 1974 with another identical engine, also built in 1944 and kept in storage for thirty years by its thrifty owners. 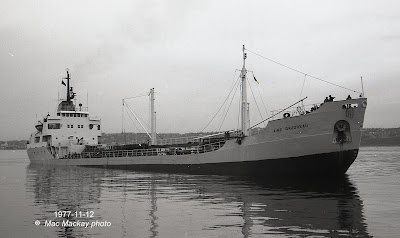 2. Aimé Gaudreau with a fresh coat of paint, a few months later. Hull straps are a giveway that the ship was lengthened.
By the time Aimé Gaudreau was built in 1964 Irvings owned the Saint John SB & DD Co and that is where it was built. A very capable ship, with an icebreaking bow, it was lengthened first in 1970 and again in 1973. Its original tonnage was 1,903 gross on 249' length and final tonnage was 2,534 gross/ 2,660 dwt on a 316' length. In 1993 with a general re-organization it was renamed Harcourt Kent (the second Irving ship to carry the name; Harcourt is a village in Kent County of New Brunswick, near where the Irvings first settled after arriving from Scotland). The ship was sold in 1994 and renamed Mor Blessing it sailed from Halifax January 5, 1995 for Nigeria. Although laid up there for time it was later renamed Zikko for new Nigerian owners. Late in 2010 it was dropped from most ship registers as likely no longer in service.
Aimé Gaudreau, the man, was a major woodlands and sawmill operator in northern New Brunswick. The ship was named in his honour.
Both ships, despite being tankers, showed allegiance to the Irving's extensive interests in forestry, which was equally as important as oil in the company's history.