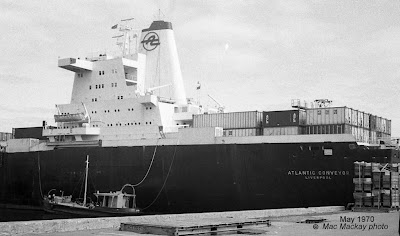 2. Atlantic Conveyor (number one) taking on water from the navy lighter YSW 219 at pier 36 on her maiden voyage in May 1970. 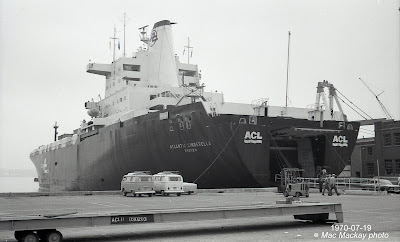 3. ACL's Atlantic Cinderella also at pier 36. Halterm's first container crane is still under construction in the background, and there are still sheds on pier B. 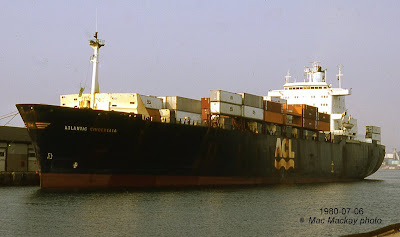 The posting about Atlantic Container Lines two weeks ago when Atlantic Cartier had engine trouble, mentioned that these are the third generation of ConRo ships operated by ACL.
The first generation ships were built in 1970 and started calling in Halifax before the Halterm container pier was completed. There were six ships in this class, named Atlantic Causeway, Atlantic Cinderella, Atlantic Cognac, Atlantic Crown, Atlantic Champage and Atlantic Conveyor. They were very large ships for the time (but puny by today's standards) of 14,946 gross tons, powered by 38,500 shp steam turbines. Each was owned by one of the original partners in ACL.
The first Atlantic Conveyor was built by Swan Hunter at the Walker yard in Newcastle, UK and owned by the Cunard Steamship Co Ltd.
It made its first call in Halifax fresh from the shipyard, and operated on ACL's regular transatlantic route until 1982. At that time it was requisitioned by the British Minister of Defense for service in the Falklands War. On May 25, 1982 it was struck by two Exocet missiles fired from an Argentinian aircraft. The explosion and following fire lead to the death of six crew and three servicemen, including its well liked Capt. North. The ship was a total loss and sank about May 31.
In honour of this ship the new G3 ship was named Atlantic Conveyor in 1986, a name it still carries, despite the subsequent sale of the ship to Sweden and later acquisition by the Grimaldi group.
It was built by the same Swan Hunter yard and made its maiden voyage to Halifax February 1, 1985. It was lengthened in 1987 at Greenock, and with its four fleet mates shares the distinction of being the largest ConRo ships in service.
.
Posted by Mac at 5:39 PM