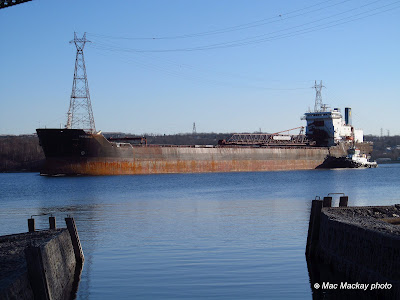 1. Ambassador glides under the MacKay bridge on its way in this morning.

2. With the tug secure, they get ready to make the turn for National Gypsum. 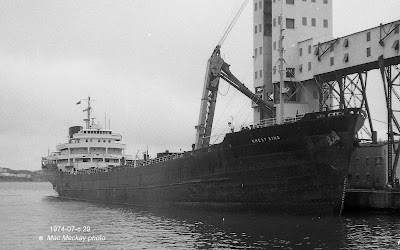 Ambassador's arrival this morning marks only the second call for gypsum so far this year at National Gypsum. The sad state of the construction industry south of the border has resulted in the lowest demand for gypsum in years.
Ambassador is the most frequent ship to call for gypsum, when there is demand. Built in 1983 at Port Weller. ON as Canadian Ambassador it was flagged out to Vanuatu on 1986. It had a brief interlude in 2000 back under the Canadian flag as Algosea but has been running under foreign flag otherwise. The ship measures 37,500 deadweight tonnes.
Since 1986 it has carried the funnel marking once used by the Island Shipping Company (a foreign flag offshoot of Upper Lakes Shipping) consisting of a yellow seahorse on a blue background. (Island Shipping also had a white centre band on their funnel at one time.) The ship was however placed in the ownership of Marbulk Canada Inc (now owned by Algoma Shipping Corp) and is operated in the CSL International pool.
The seahorse motif for Island Shipping was first applied to the bulk carrier Wheat King once a regular caller in Halifax. Built as the tanker Llandaff by Lithgows of Port Glasgow in 1952, it was converted to a bulker and its wheelhouse moved aft in 1960-61. It traded transatlantic in various winters with grain. In 1965-66 it was the first Canadian ship to call in Liverpool in 15 years. (In 1961-62 it had been under Bermuda flag). It was also the first ship to arrive with the new Canadian flag. It was a familiar caller in Halifax with grain and carried gypsum back to the lakes from, but not from Dartmouth. In 1970 it took grain to Alexandria, Egypt.
During the winter of 1975-76 it had a new mid-body installed, and was lengthened to Seaway size, but was not reinforced for ocean going. At that time it lost the seahorse funnel and adopted the Upper Lakes Shipping mark. However it did make one more call in Halifax, and that was on the end of a tow wire.
It had been sold for scrap and departed Lauzon, QC in tow on November 24, 1986, but was damaged while clearing the dock. After an inspection in Sept-Iles, QC, it was brought to Halifax and spent December 2-10 here for repairs. It then sailed in tow of the Polish tug Jantar for Rotterdam where it was used for grain storage until 1989. It was then towed to Chittagong, Bangladesh where it was finally scrapped.
So the seahorse funnel mark has some tradition to it.
.