GSF Grand Banks - and they're off 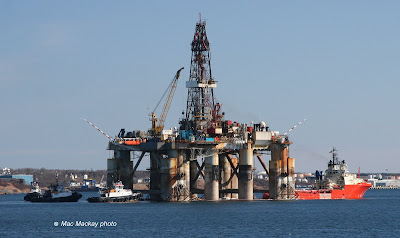 1. Tugs Atlantic Larch, Oak and Willow have positioned the rig in number one anchorage. 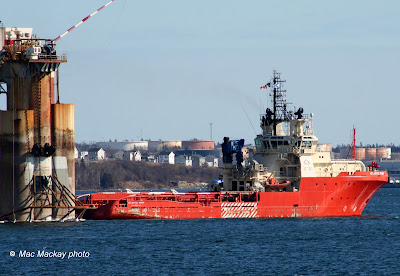 2. Atlantic Hawk backs in to make up its tow line. 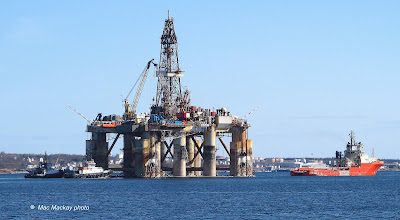 Following a maintenance and damage repair session at Woodside the drilling rig GSF Grand Banks got underway this morning for Newfoundland. It took until early afternoon for the three harbour tugs to get the rig off the berth and out into the stream. Once in the #1 anchorage area, the tug/supplier Atlantic Hawk made up its tow line and they were underway about 2 pm.On November 24 the rig was struck by its supply vessel and holed above the waterline. Although the damage did not hamper the rig's stability, it was immediately taken out of service and its maintenance period - scheduled for January- was moved ahead. It arrived in Halifax December 11 in tow of Atlantic Hawk and Maersk Chancellor.
Operated by Transocean Canada Drilling Services Ltd, the rig was working for Husky Oil on the West White Rose pilot project, about 350 km off Newfoundland. It was doing water injection when the incident occurred.
The rig is registered in Vanuatu and has a coasting license to operate in Canadian waters until June 30. There is enough work that the rig will likely renew that license.