Atlantic Cartier - all is not well at ACL 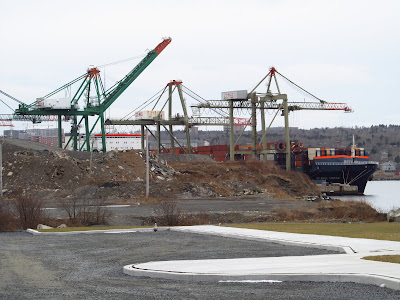 1. Still tied up at the east berth of Fairview Cove, Atlantic Cartier is immediately identifiable by the red stripe on the dam. The huge pile of dredge spoil and contaminated fill on the left may be there for ever. 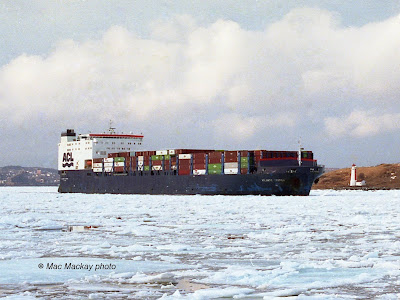 2. Among the many challenges the ship has faced over the years was the surprise arrival in Halifax of drift ice from the Gulf of St.Lawrence in April 1987. The ice flowed in and out with the tide, eventually drifting back out to sea to stay.

The container RoRo (Con-Ro) Atlantic Cartier is still tied up at Fairview Cove this afternoon. The ship arrived on Thursday and was due to sail that afternoon. Several tentative departure times were cancelled, and a trials trip to Bedford Basin for this afternoon has apparently been scrubbed now too. Some sort of mechanical problem has obviously delayed the ship from keeping to its appointed rounds. This will undoubtedly cause much grief within ACL as the five ships keep a tight schedule on their transatlantic route and delayed port calls are a ship operator's nightmare.
Atlantic Cartier was the French contribution to the original Atlantic Container Liner when it was a multi-national operation. Cie Générale Maritime SA (CGT) was the owner and the ship was built at the Chantier du Nord at Dunkirk. There were subtle differences between the British, Swedish and French ships, but in recent years the most noticeable is the large dam with red stripe at the bow of Atlantic Cartier to protect containers from head seas damage.
The ship was launched April 15, 1984 and delivered in 1985, measuring 25,362 gross tons. In 1987 Hyundai Mipo in Ulsan Korea lengthened the ship to its present size, giving it a container capacity of 2908 TE (1,000 on deck) and its vast RoRo garage space. These ships, commonly called the G3 (third generation) are the largest Con-Ros in the world, on one of the most taxing of routes.
Since 2007 ACL has been part of the Grimaldi Group, and the ships have all flown the Swedish flag for many years. http://www.aclcargo.com/
In 2011 however, technical management was switched from Rederi AB Transatlantic of Sweden to Bibby Ship Management. http://www.bibbyshipmanagement.com/
At 958 feet long Atlantic Cartier is an impressive ship. It is powered by a single 6 cylinder Burmeister & Wain 6L90GBE (built under license by Alsthom) delivering 27,450 bhp for a modest 17.5 knots.
ACL has been planning to replace the current G3 ships with new G4 ships, but recent economic issues have no doubt put those plans on hold.
.
Posted by Mac at 2:33 PM