HMCS Athabaskan to the Lakes, HMCS Halifax in Halifax 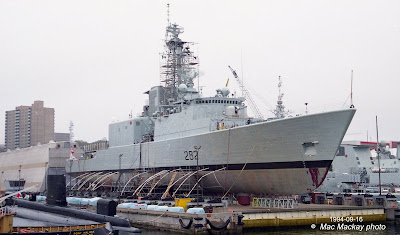 1. This 1994 photo shows Athabaskan on the synchrolift at HMC Dockyard.

2. Halifax is alongside Halifax Shipyard for FELEX. The sign on the Machine Shop in the background seems to advertise the ship's name.

HMCS Athabaskan will be going to the Great Lakes for its refit next summer. It was announced that Seaway Marine and Industrial, operators of the Port Weller Dry Dock has received the contract for the Tribal's refit. The refit will extend the ship's life five more years until a Halifax class frigate is upgraded to destroyer status.
Having the work done elsewhere is hardly surprising, given that Halifax Shipyard is full out with the FELEX refits of the Halifax class ships with the first one to be completed this year, and the remaining east coast units by 2017. Not to mention completion of the Hero ships and planning for the new frigate program.
HMCS Halifax is the first of the ships to undergo the Frigate Life Extension program (FELEX) which involves replacement of upgrades to most of the ships' systems.
At this point Halifax is alongside with its wheelhouse tarped in and fleet mate xxxxxxx [sorry Fredericton - thanks for the correction] is in the graving dock.