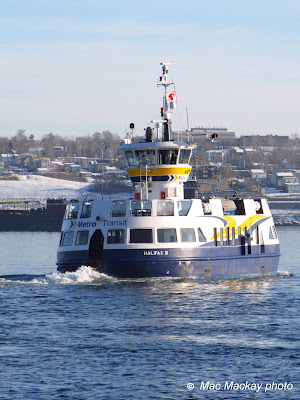 1. Halifax III sets out for Woodside on January 23. As of today it is tied up with transit workers on strike. Its first day of operation was September 10, 1979. 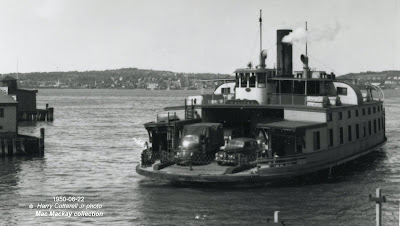 3. Halifax was a double ended steam ferry and ran from 1911 until 1956 when a bridge across the harbour brought an end to car ferry service.

A strike by transit workers in the Halifax Regional Municipality means no bus or ferry service for thousands of commuters. The ferry system has been a part of Halifax life since 1752. There have been four ferries named Halifax over the years, the first, a former Brooklyn, NY boat was acquired in 1890 and was lost to an arson fire in 1909. The next Halifax, built by Napier & Miller in Old Kilpatrick, Scotland, sailed on its own to Halifax, arriving in the autumn of 1911. It served until 1956 when car ferry service was ended.
The next to carry the name was called Halifax II and it was built of wood by Smith & Rhuland in Lunenburg. It served until 1979 when the current Halifax III entered service.
The present ferry fleet consists of Halifax III, Darmouth III and Woodside I. Design work is underway for a new ferry, but no details on construction dates have been released.
The former City of Dartmouth owned and operated the ferry fleet for many years, and it was not until 1994 that the service was folded in with Metro Transit, which operates the bus service.
The last such strike in 1998 lasted five weeks, but this one is promising to cause more gridlock than the last one, due to an increase in population and greater reliance on transit.
.
Posted by Mac at 11:48 AM