To follow up on my posting of February 8, [http://shipfax.blogspot.com/2012/02/hellespont-challenger.html] here is a little more on the Hellespont Shipping Co which got its start in Canada following World War II when founder Phrixos Basil Papachristidis acquired some surplus Canadian built cargo ships. To give him credit he remained in the Canadian shipping scene for a long time before moving offshore into the international tanker market and other ventures.
The Hellespont website is rare in that it gives a capsule history of every ship the company has owned. As I mentioned last, I detected one error, and Bruno detected another.
Certainly the tanker Fiona M. did not fly the Canadian flag. It was always Panamanian flagged as far as I can determine. Thanks Bruno.
The other error was in the photos. The company owned two ships named Cavala. The first is pictured accurately, but under the entry for the second Cavala, there is a repeat of the picture of the first ship. Some would say that the second Cavala was so ugly that no picture should be shown, but I will disappoint them and show several. Built originally as Ore Convey for Daniel K. Ludwig's Universal Tankships Inc at his own yard in Kure, Japan, it followed the typical Ludwig pattern: purely functional. Who can argue with success? Ludwig became one of the richest men in the world and Japan became a powerhouse of shipbuilding as a result of the efficiencies he introduced into shipbuilding.

1. Cavala sails from Halifax with another load of gypsum - she was no beauty.

2. The self-unloading elevator came up through the deck and was surmounted by the bridge.

3. Even the ship's funnel was stingy- Ludwig didn't miss a beat. Why the funnel bore the letter "N" is a bit of a mystery, but it probably stood for National Gypsum, the ship's charterers.

When Papachristidis bought the ship in 1969 it became a frequent caller in Halifax for gypsum right up until 1982 when it was badly damaged while docking at National Gypsum. It was sent to Taiwan and was scrapped on arrival in April of 1983.
There is still debate about who was first with sea-going self-unloaders. US Gypsum/ Fundy Gypsum, Daniel K. Ludwig with Cavala or Ole Skaarup with Melvin H. Baker. All built ships in 1956, all were self-unloaders, but only Skaarup claimed to have invented the system.

While on the topic of Papachristidis, his last major effort in Canadain shipping was the fleet of elegant Great Lakes bulk carriers. All but two have now gone to the boneyard, but the last two are about to take on new names and colours for 2012. Montréalais, built as Montrealer in 1962 and Québecois, built in 1963, are among that now rare breed of traditional lakers, with wheelhouse forward and steam turbine propulsion. When Papachristidis sold out in 1972, Upper Lakes Shipping acquired the ships and operated then continuously until 2011. Algoma Central bought the Upper Lakes fleet in 2011, and both ships will come out in 2012 with the new names Algoma Montréalias and Algoma Quebécois. It is a tribute to the ships and their long history that the names will be not be greatly altered.

4. Québecois, upbound past its namesake city, has the hydrants running on deck for washdown. 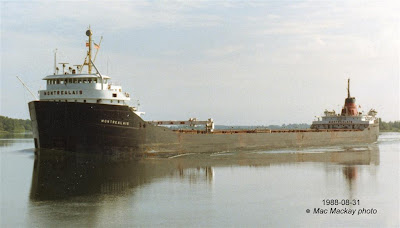 5. Montréalais has cleared the Eisenhower Lock upbound in the Seaway on a warm morning. She is pushing the usual wall of water, common in canals and restricted waterways.