1. Artania sailed at dusk this evening.

The veteran cruise ship Artania paid a return visit to Halifax today, many years after its first visit and under a different name.
Built in 1985 by Oy Wartsila in Helsinki as Royal Princess the ship first visited Halifax in 1991. It returned  for several years thereafter until renamed Artemis in 2005. Last year it took on its current name Artania for V Ships Leisure of Monaco.
Still very smart looking, the ship the ship carries only some 1300 passengers in 600 cabins. 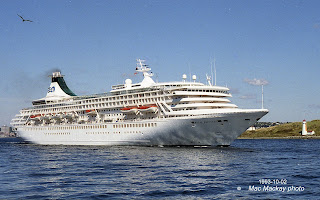