The destructive force of Hurricane/Tropical Depression Sandy bypassed to the west of Halifax, with only high winds and rain felt in the port. At high tide this morning there did not appear to be any significant storm surge, although there will certainly have been minor damage to some wharves due to waves.
Several ship arrivals were delayed, and some ships remained in port. 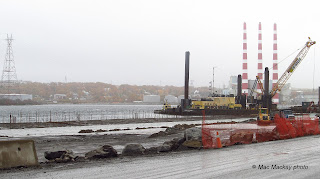 1. Work on the Richmond Terminal extension continued unabated. Water was just lapping the top of the new caissons, but filling operations were not delayed. The tug Whitby works with the dredge Canadian Argosy at the old "knuckle" of Pier 9C as breakers remove the old pier face and remove old fill material. 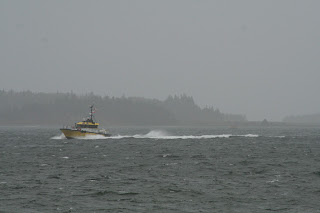 2. Chebucto Pilot kicks up some spray inbound after working outbounds and an inbound. The outbounds had remained in port overnight. 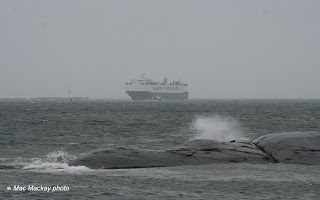 3. By the time the autocarrier Turandot was inbound, the highest gusts had abated but there was still a stiff easterly  wind and some waves in the harbour.

﻿Western Nova Scotia received much heavier winds , heavier rain and higher seas, and the Saint John-Digby ferry service was cancelled for the day.
Posted by Mac at 7:17 PM