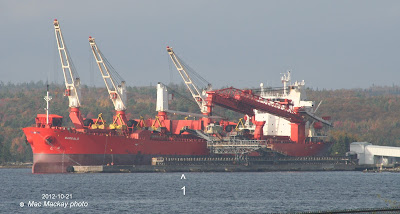 1. Barkald loads at National Gypsum. The shore based loader (above the number 1) moves back and forth along a track on the dock, filling the ship's holds evenly.

The self-unloading bulker Barkald loaded at National Gypsum and sailed this morning. Built in 2001, the ship is operated by Klaveness Shipping of Oslo, and is registered in the Marshal Islands. It is part of the CSL/Klaveness/Oldendorff pool of self-unloaders.
The sip was built in Japan and measures 28,924 gross tons, 49,463 deadweight and unloads using its own cranes, clamshell buckets and a conveyor system on deck. The self-unloading boom is mounted on the port side just forward of the bridge. The boom is articulated, so that it can swing out and direct the flow of material without having to move the ship.
Posted by Mac at 12:09 PM