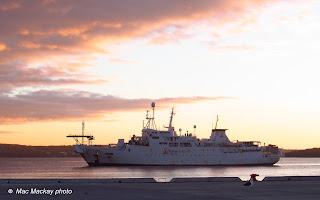 Raymond Croze, a French cable ship, arrived at sunrise this morning and tied up at pier 23. Built in 1983, it is a traditional type cable ship, with bow sheaves. It normally works in the Mediterranean from its base in La Seyne-sur-Mer, and it is unlikely that it has ever called in Halifax before.
On August 12 another cable ship from France Telecom, the Chamarel was totally destroyed by a fire on the Skeleton Coast of Namibia. Based in Capetown, it served the south Atlantic and Indian Ocean. With its loss France Telecom has had to re-deploy its other ships to cover the repair/cable work it must do to maintain its "Orange" network. This may explain why we are seeing Raymond Croze in Halifax.

2. The ship is immediately recognizable as a cable ship  because it has the traditional bow sheaves. Many newer ships work only over the stern.
Posted by Mac at 12:29 PM