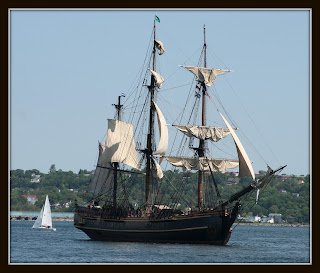 Two persons are still missing after the replica of HMS Bounty sank off Cape Hatteras, NC this morning. Both the ship's long time captain, and a direct descendant of Fletcher Christian from the famed mutiny were wearing survival suits, but did not make into the two life rafts when they abandoned ship early this morning.
The other fourteen persons from the ship were airlifted by USCG Jayhawk helicopters in 40 mph winds and 18 ft seas as Hurricane Sandy battered the area.
Bounty was built by Smith & Rhuland in Lunenburg in 1960 for the MGM film Mutiny on the Bounty and was extensively rebuilt after years of neglect. Reports indicate that it had also recently emerged from a refit and was on its way from New Haven, CT to St.Petersburg, FL when it lost power and began to take water on Sunday, and sank this morning.
A regular participant in Tall Ships events in Halifax, the ship had travelled widely, including a visit to the Great Lakes. 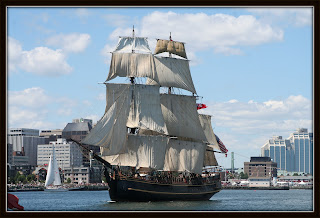 Update 2: The body of the missing crew member was recovered this evening, but the captain is still missing.
Posted by Mac at 5:43 PM