Way Hay Up She Rises 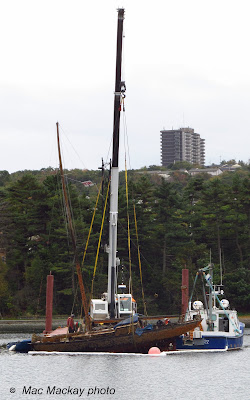 1. A crane has raised the boat to the surface.

The sloop Rascal broke surface this afternoon after six weeks on the bottom of the Northwest Arm. The pleasure craft sank at its mooring on August 2 . The Halifax Port Authority, which has responsibility for the Arm placed the owner on notice to raise the boat, but there was no response by the deadline.
This morning RMI Marine mobilized a tug, crane scow, tender and motorboat to the scene. Divers secured the hull and placed slings around it, and by early afternoon the crane had raised the boat to the surface.
The Port Authority has possession of the boat and will attempt to sell it to recoup costs. 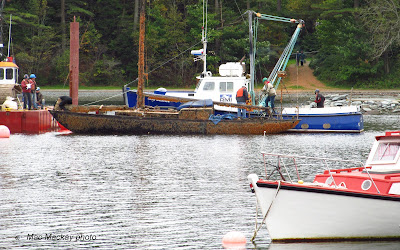 2. After casting off the slings, the launch Lady Shirleen takes the boat in hand and sets out for pier 29. 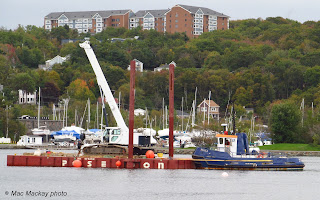 3. The job done, the tug Belle D. leaves the scene with the sectional scow and crane.
Posted by Mac at 5:04 PM