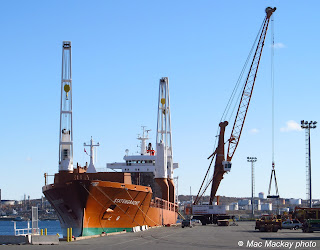 1. Yesterday at pier 31 Logistec Stevedoring was using their large mobile crane to load crawler crane components on to Statengracht.

The Dutch flag Statengracht is a member of the ubiquitous Spleithoff's fleet of ships that travel the world looking for unusual cargoes to carry. The ships are fitted for heavy lifts, moisture controlled bulk or break bulk cargoes, or cargoes of unusual size or shape.
On a previous visit the ship loaded wood pellets, going to the Netherlands to be used as fuel, and required humidity control during transit. These ships are able to do that with sophisticated controlled ventilation systems. They are adaptable to many kinds of forest products including lumber and paper too. Special sideloading doors and elevators allow for speedy and weather protected cargo handling for rolls of paper and other forkliftable cargoes.
On this visit the ship loaded a number of heavy components for a crawler crane. The largest pieces arrived by rail on special heavy weight cars. The ship's hold is designed to carry heavy cargoes (20 tonnes per sqaure meter on the lower deck) and the ship carries equipment to brace and secure these types of cargo. Although the stevedores used a shore based crane this time, the ship is also fitted with three heavy lift cranes, rated at 120 tonnes each, allowing it to load an unload where shore based equipment is not available.
These ships are also set up to carry windmill components and other large/long cargoes that would not fit on a normal ship. The holds are equipped with removable 'tweendecks that permit a variety of configurations for different loads..
To see an excellent video on the "S class" ships of the Spliethoff fleet, go to their website at:
http://www.spliethoff.com/

2. Statengracht sailed early this afternoon.The large shapes on ship's starboard side are the elevator housings and side loading doors.
Posted by Mac at 3:51 PM