With the end of the cruise season in sight on October 30, and after today only three more ships, it was as usual an impressive sight to see Queen Mary 2 arriving in brilliant sunshine. That sun unfortunately made photographing the ship (again) a challenge since shooting was directly into the sun. 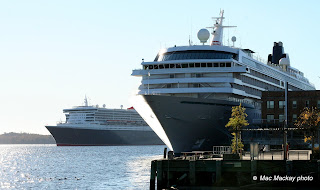 2. The ships turned and backed in to pier 22, astern of Crystal Symphony.

Also unfortunately the ship turned and backed in to pier 22, depriving us of a close up view.
On her first visit September 25-26, 2004, the ship obligingly passed east of George's Island and made a triumphant sail past the Halifax waterfront - a truly memorable experience. 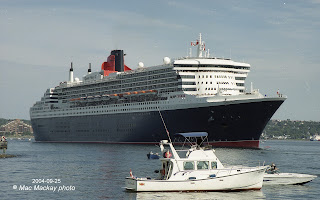 3. On her first arrival in Halifax in 2004 she sailed along the Halifax waterfront , which was lined with spectators, and the harbour was choked with pleasure craft.

4. Sailing the next day, the ship has just dropped her pilot off Chebucto Head and is picking up speed. Her first paint job was already in the process of a major touch-up.

At 151,400 tons the ship is still among the largest passenger vessels in the world, and still holds the spot as world's largest transatlantic liner, if only in name, but is certainly the most impressive.
After a short stay in port, the ship was due to sail at 7pm this evening.
Posted by Mac at 10:16 PM