1. Atlantic Vision at 4:30 this afternoon was in the Novadock floaoting drydock at Halifax Shipyard, but had not yet been raised.

Marine Atlantic's North Sydney/ Argentia ferry Atlantic Vision arrived at Halifax Shipyard today for drydocking. While preparing to be lifted a fire broke out on the ship at about 3 pm. It was quickly put down, but two persons were taken to hospital by ambulance with smoke inhalation. A spokesperson for the Halifax Regional Municipality Fire & Emergency Services was quoted on new reports stating that the ship's crew extinguished the blaze and a spokesperson for Irving Shipbuilding called the incident a "backfire."
There were no outward signs of the incident an hour later, but the ship had not been lifted yet.
Built in 2002 in Germany as Superfast IX, the ship was intended for Baltic service, and operated between ports in Sweden, Germany and Estonia until chartered to Marine Atlantic in 2008.
It operated from 2008 to 2009 under the Cypriot flag, but was but was registered in St. John's June 6, 2009. It operated for time on the North Sydney to Port aux Basques run but it was always intended for the Argentia run, which it took over when Marine Atlantic's Blue Puttees and Highlanders entered service.
At 30,285 gross tons, it is Canada's largest ferry, carrying 728 passengers at speeds up to 30 knots. It is also ABS ice class 1A super.
Today's arrival is the ship's first visit to Halifax. 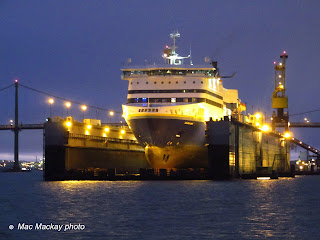