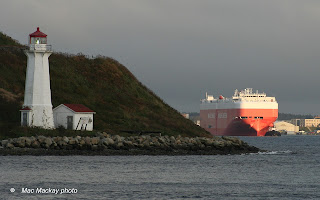 1. After a dreary, foggy and drizzly day, the autocarrier Queen Sapphire caught a brief glimpse of the sun just as it was setting.

The ship was moving from Autoport to Pier 31 with the tugs Atlantic Oak and Atlantic Larch and emerged from Eastern Passage in blazing low sun. However by the time it reached the main harbour the sun was fading and was gone before it berthed. After unloading some machinery cargo at pier 31 it will sail later tonight.
Although wearing the colours of the Wilhelmsen Line, the ship is owned in Singapore by Melodia Martitime Pvte Ltd, and managed by MMS Co Ltd of Tokyo. It is on long term charter to Wallenius-Wilhelmsen but does not carry the usual Wilhelmsen name, beginning with the letter "T". Built in 2009 it measures 60,123 gross tons and can carry 6,340 cars. Even so it is among the smallest ships in the W-W fleet. The largest ship in the current fleet is rated for 8,000.

2. The pilot boat APA No.20 returns with the pilot from Norwegian Dawn as Crystal Symphony gets under way from Pier 20.

3. Once into the main harbour the sun has gone. revealing an incomplete repainting job.
﻿
Posted by Mac at 7:13 PM