2. The barge Columbia is showing a bit more freeboard.

After completing operations at Kometik, it was time for Mattea to receive bunkers. The operation lasted into the evening, after which Mattea was to go into Imperial Oil to discharge her cargo of crude, and the tug Siberian Sea and barge Columbia set out for New York. 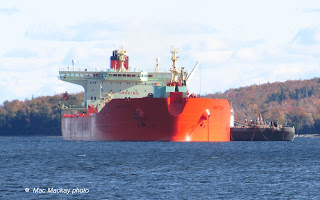 3. Although a sister to Kometik, Mattea has the more impressive paint scheme. Both ships have been drydocked recently.
Posted by Mac at 10:11 PM