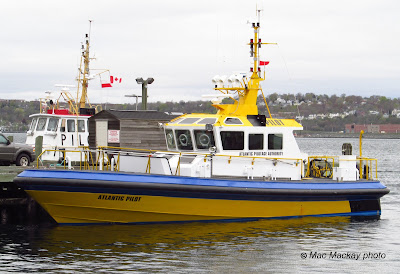 The Atlantic Pilotage Authority wharf had a visiting pilot boat today. Atlantic Pilot is one of a pair of pilot boats built for Placentia Bay, by A.F. Theriault in 2007 to a Camarc design. It was here before in November 2007 for trials.

Avalon Pilot was built first, and delivered in May 2007 and Atlantic Pilot was delivered in October of 2007. Both also worked in Saint John, NB for a time before taking up station in Placentia Bay. The bay is a busy pilotage area, with the Whiffen Head terminal, Come-by-Chance refinery and Kiewit shipyards at Marystown and Cow Head. Much of the traffic is tankers with several arrivals and departures daily.
The boats are slightly larger than the Halifax boats because they must withstand harsher conditions, and they are capable of greater speed because of the great distances they have to travel. With two Caterpillar engines of 925 bhp each they can hit 23 knots.