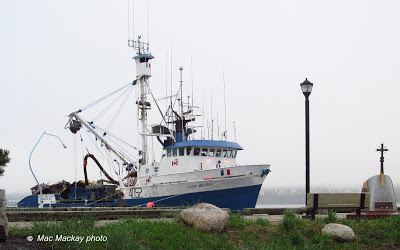 The herring seiner Lady Melissa tied up at Bishop's Landing near the Acadian Memorial. The stone monument was set there in 2005 to mark the 250th anniversary of the Grand Dérangement which saw the deportation of thousands of French settlers from Nova Scotia by the British government. More than 2,000 Acadians were imprisoned on nearby George's Island over a ten year period.
Some Acadians made their way back to Nova Scotia, and re-settled on the southwest shore, where their descendants maintain a lively francophone culture today.
Lady Melissa is owned by Comeau's Sea Foods Ltd of Saulnierville, NS, in the heart of "the French Shore". It also wears the flag of Acadia on its bows, wheelhouse and crowsnest..
Built in 1980 by Ferguson Industries Ltd in Pictou it is the largest of many herring seiners that move around the coast yearly seeking the sometimes elusive fish. Last year there were virtually none, but there are hopes that they might make a catch this year.
On the right side of the photo is one of the "drunken lamposts", part of an art installation. It will be removed in the fall and is not a permanent fixture on the waterfront.
Posted by Mac at 11:02 PM