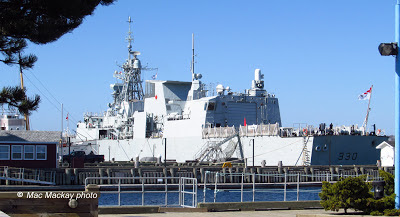 In the worlds of Alfred Lord Tennyson "The old order changeth yielding place to the new", and so it was this morning when for the first time ships of the RCN flew the naval ensign from the stern and the Canadian flag, as jack, from the bow.

Halifax's array of new radars installed during its FELEX refit makes it hard to read the other signals flown from the ship's mast.
For an explanation of the new protocol see:
http://www.navy.gc.ca/cms/3/3-a_eng.asp?category=7&id=936

The way it is explained is that the former naval jack has become the naval ensign, and the Canadian flag has been adopted as the jack.