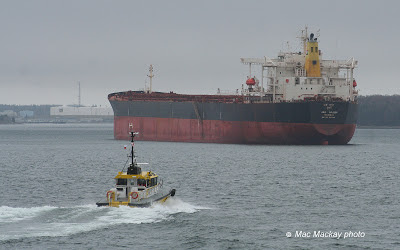 1. Chebucto Pilot takes a pilot out to Jag Arjun at number one anchorage.

It seems to be a week of superlatives in Halifax-everything is on a big scale.
Today's arrival of a large bulk carrier is no exception. Flying the flag of India Jag Arjun measures 85,845 gross tons and 164,796 deadweight tonnes. It is therefore somewhat larger than the normal large tankers that call in Halifax.Built in 1996 by China Shipbuilding Corp of Kaohsiung, Taiwan, it was originally named Thalassini Axia and operated for a branch of the N.S.Lemos group, under the Cypriot flag.
In 2007 it was acquired by its present owners, Great Eastern Shipping Co Ltd of Mumbai.They have a fleet of  31 ships, mostly tankers, but also bulk carriers, all with names beginning with "Jag".
http://www.greatship.com/businessfleet.html
After the mandatory CFIA inspection for Asian gypsy moth, the ship moved from anchorage number one to pier 27-28 at noon time. 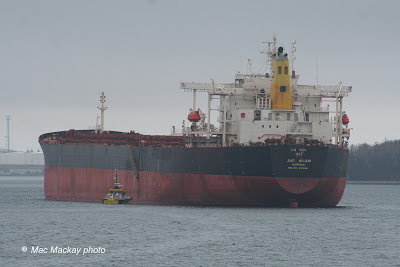 2. Once alongside, the pilot begins the long climb on a combination ladder and gangway. Once on the main deck there will be an elevator to reach the ship's bridge. Total height above water  is equivalent to a ten to twelve storey building.
Posted by Mac at 12:58 PM