HMCS Windsor -carrying on, and RCN too


Canada's east coast submarine HMCS Windsor is exercising around Halifax, due to a restriction on activities.  It has been reported that the sub is confined to Canadian coastal waters due to a faulty generator. One of the boat's two generators has packed it in and must be removed and replaced. The restriction means that Windsor cannot participate in exercises in the south.
Windsor arrived this morning for a PAX transfer and sailed, just as the two cruise ships were arriving.  It returned later this afternoon, for another PAX transfer, then proceeded up west of George's Island to Bedford Basin.
And from correspondents: 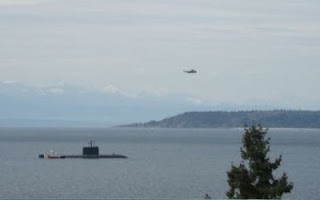