The bulk carrier Aquagrace took on bunkers this morning before continuing it voyage from Hunterston, UK to Port Cartier, QC. It is likely that the ship also had a CFIA inspection for asian gypsy moth larvae at the same time. 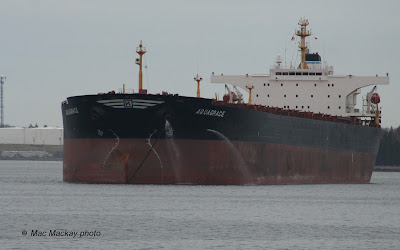 2. As the ship recovers it anchor, it pumps seawater on deck to wash and lubricate the anchor cable as it comes back aboard.

At 85,315 gross tons and 167,105 deadweight tonnes, this is a big ship. Its dimensions of 928 feet (overall length) x 154 feet breadth, and 80 feet depth (59.6 feet draft when fully loaded)  restrict it to the Suez Canal. New locks in the Panama Canal will be able to accommodate the ship in terms of its length and breadth, but will not be deep enough at 49.9 feet for the ship to use when fully loaded. 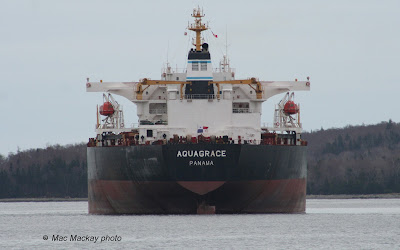 3. Once it has recovered its anchor the ship backs, and with rudder hard over turns to head south.

Built in 1997 by Halla Engineering and Heavy Industries Ltd in Samho, South Korea, the ship is owned by Carras Hellas SA and registered in Panama. The letter on the funnel is the Greek letter Kappa, which would be the first letter of the world Carras if spelled in Greek.
Once it reaches Port Cartier, it will load iron ore.

4. Underway for sea, that is the Ives Knoll bell and whistle buoy off its port bow.