The answer to yesterday's question about which cruise ship will actually tie up first to start the 2013 cruise season has finally been answered. It looked like Veendam would be it, but a last minute change saw Silver Whisper directed to the pilot station first. 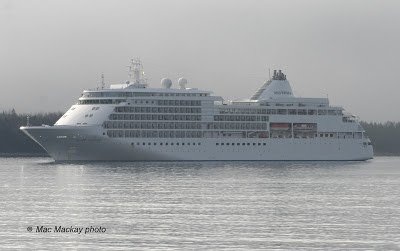 1. Silver Whisper emerges from the early morning fog - taking the prize as first cruise ship of the 2013 season.


The Veendam followed then proceeded east and north of George's Island, allowing Silver Whisper to slip into pier 23. 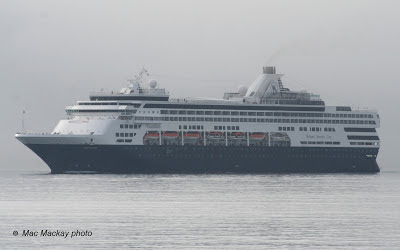 Comparing today's photo of Veendam with the one posted yesterday, you will see the added "duck tail" at the stern, and more cabins high on the after deck. Not an improvement in appearance!
Posted by Mac at 9:13 AM