The Russian flag tanker SCF Neva arrived at inner anchorage. The ship will be moving to Imperial Oil at some point. As with all Russian flag ships, the name appears in Cyrillic characters on the bow. Usually there is a bridge board with the name in Arabic letters. 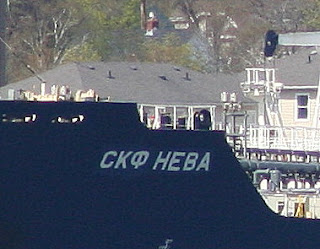 Despite the name in Russian the company logo and the "Safety Comes First" slogan on the house are in English. This may be because the ship flew the Liberian flag from the time it was built in 2006, until 2012. It flew the Cyprus flag for one day while transferring from Liberia to Russia.

SCF stands for Sovcomflot, one of the large Russian shipping companies. A subsidiary, Unicom, manages the ships from Cyprus.
The ship was built by STX Shipbuilding Co in Jinhae, South Korea, and measures 29,902 gross tons and 47,125 deadweight. It also features a full width bridge, indicating that it is intended for use in northern waters.

OOCL Hong Kong also arrived, to the accompaniment of guitar music - spring must be here! The ship is a typical post-Panamax ship of 66,046 gross tons, built in 1995. It flies the dual flag of Hong Kong and China.