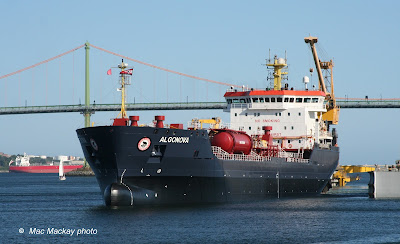 1. As Algonova emerges from the drydock, I was standing down-wind and the smell of fresh paint filled the air!

The coastal tanker Algonova emerged from the Novadock floating drydock on Saturday afternoon,
resplendent in a new coat of paint.
Built by MedMarine, Eregli, Turkey, it was delivered September 12, 2008. Thus it would seem that this drydocking included a mandatory five year survey and all the work required for the ship to maintain its classification. It spent the winter of 2008-2009 on the Great Lakes, but since then has worked on the east coast and is one of the mainstays, with Algoscotia, of Imperial Oil's distribution from the refinery on the Dartmouth side of Halifax harbour. The ship does make summer trips to the Lakes, but is essentially an east coast and Gulf of St.Lawrence ship.
It measures 7,773 gross tons and 11,240 deadweight. There were reliability issues in its first couple of years of operation, possibly with the main engine (which is an MaK) but those seem to have been resolved.


2. The tug Atlantic Larch was called in top assist the ship out of the dock and for turning once clear, but the ship was using its own power, including the bow thruster, seen in in action here.

Algonova went to pier 27 for completion of refit before re-entering service.
Posted by Mac at 7:24 PM