The unusual appearance of no less than four Dutch flagged ships in Halifax at the same time was impossible to capture in one photo - unless I had a helicopter.
Speaking of which, the lightest load lifted in Halifax harbour today was made by a Canadian military Search and Rescue Agusta/Westland CH-149 Cormorant off George's Island this afternoon. (The SAR version of the proven military EH-101 is the helicopter the Canadian navy should have in service by now if the previous government had not cancelled  the order. The substitute from Sikorsky has not been delivered yet, and may never be). 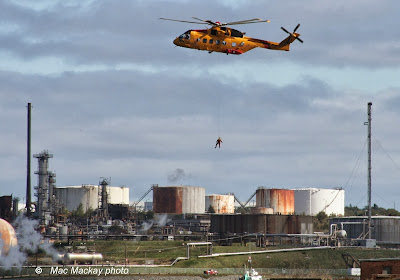 1. Where I would need to be to take a picture of four Dutch flagged ships - no thanks.

Among the visitors from the Netherlands was the big cruise ship Eurodam:
2. Eurodam sails, leading Seven Seas Adventurer.

Heavy lift ship Fairlift brought in some large cargo packages and sailed this afternoon for Hamilton, ON.
3. Outbound Fairlift stows its heavy cranes in a vertical position.

Fairlift was built in 1990 and carries one 400 tonne and one 250 tonne crane, which can work in combination. It is a shallow draft ship with a single large hold served by a single hatch. It called in Halifax in 2006 and 2007  loading GM EMD export locomotives both times.

The fourth Dutch ship in Halifax today is Hollandia, operating for Nirint and off-loading the usual cargo of nickel sulfides from Cuba. (For a photo see Halifax Shipping News.)