Michael A for Melfi Lines 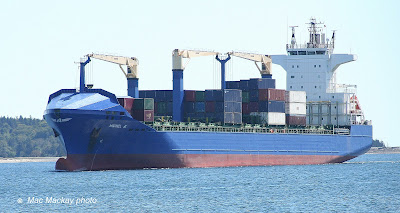 I am gradually catching up on the latest batch of ships for Melfi Lines. They charter in all their tonnage on the Europe/Cuba service, and recently some of the older charters were sold off and replaced. Today's arrival, Michael A is owned by the Turkish firm of Egekont Konteyner Tasimilik and managed by Arkas Denicilik VE Nakiyat. Oddly for a Turkish flag ship, it was built in Germany in 2007 by Peene-Werft GmbH of Wolgast.
It is fitted with three cranes of 45 tonne capacity, and can carry 1604 TEUS and has 178 reefer plugs. It measures 17,687 gross tons and 22,014 deadweight tonnes.
This is the ship's fifth trip for Melfi, represented in Halifax by Protos Shipping, and working cargo at the Halterm container terminal..
Posted by Mac at 10:17 PM