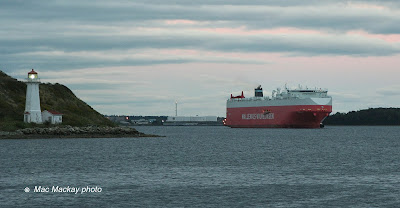 Wilhelmsen Lines Tonsberg arrived at Autoport this morning and moved over to pier 31 this evening. Claimed by its owners to be the largest and most modern RoRo ship in the word when it was built in 2011 to meet a demand not met by traditional car carriers (PCCs).
PCCs and their cousins PCTCs (pure car and truck carriers) can only carry cars and trucks - and some of the ships are huge, with up to 6,000 or 7,000 car capacity. (Measured in CEUs=Car Equivalent Units or RT43= a 1996 Toyota).
Large RoRo operators, like Wilhelmsen have added break bulk and other RoRo cargo to the mix, building ships with extra wide, heavy duty stern ramps and hoistable car decks to accommodate non-car cargo.
Tonsberg's specs are impressive, even though its CEU rating is 5990. Its 9 decks (3 hoistable) and 505 tonne capacity stern ramp12m wide, allows it to carry a variety of oversize cargo.
Tonsberg, a Mark V ship in Wilhelmsen terminology, commemorates the company's founding city in Norway, and was built by Mitsubishi Heavy Industries in Nagasaki, Japan and is registered in Malta. Its gross tonnage is 75,251 tons.

2. The ship's immense size can only be appreciated from broadside on. Unlike PCCs and PCTCs it does not have side doors, only a huge stern ramp.
Posted by Mac at 8:22 PM