The veteran dredge Rosaire was rebuilt and renamed (in 2012) by Dragage Océan DSM Inc of Quebec City. Part of the large Groupe Océan tug, dredging, marine construction and shipbuilding conglomerate, Dragage Océan (Ocean Dredging) acquired Rosaire early in 2012 along with almost all the assets of Dragage Verreault when that company was declared bankrupt. (The trailing suction hopper dredge Port Méchins was not included in the sale, but I understand it was sold for scrap in Mexico.)

Built in 1952 by then Saint John Drydock Co Ltd in East Saint John. NB, for the Minister of Public Works, Rosaire was originally named P.W.D. No. 21 and measured 609 grt. The J.P.Porter Co acquired the unit in the 1960s and renamed it  JPP No.530. Following the wind up of J.P.Porter in 1979, Verreault Navigation Inc bought the dredge. By this time its tonnage had increased to 714, possibly due to additional living quarters installed on the upper deck. In 2000 Verreault Navigation spun off the dredging fleet from its shipyard and ownership became Dragage Verreault.


1. Rosaire doing maintenance dredging at Rivière-du-Loup, WC in 1994, attended by IV. No.11 and I.V.No.13 the unique craft invented by Borromée Verreault.
2. Arriving in Halifax in 1994, shepherded by the same two hopper boats that also served as tugs.

The dredge worked on the St.Lawrence River, Saint John, NB and other ports in eastern Canada until laid up in Meteghan. It was not in great shape when Océan bought it, but it was apparently worth rebuilding. The work was done during the summer of 2012 at Quebec City and at Industrie Océan, the group's shipyard in Ile-aux-Coudres, QC, and went in to service in 2012 with a new Liebherr crane..

Interestingly the new name selected for the dredge is Océan Borromée-Verreault in commemmoration of the founder of Verreault Navigation. A dynamic personality by all accounts, Capt.Verreault was one of the early winter navigators on the St.Lawrence and revolutionized dredging with the use of self-propelled hopper boats, which Océan also acquired and rebuilt for further service. 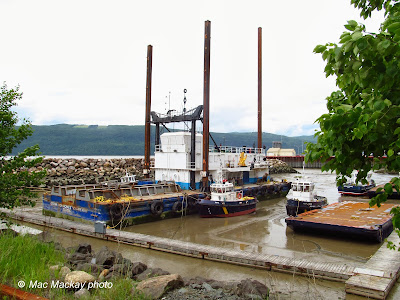 3. As rebuilt, the deck house has been cut back to make room for a large crane. 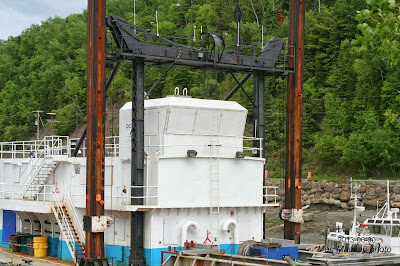 4. The dredge now has a new control station, which looks like a ship's wheelhouse. 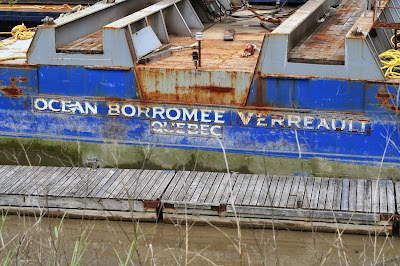 5. The stern was modified and a new bed was installed for the large Liebherr crane. 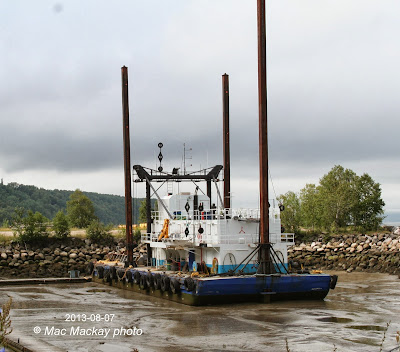 6. The dredge was dried out on the mud at Ile-aux-Coudres in early August.

The rebuilt dredge was still in layup with the windows shuttered at least until August this year, but is again at work.

For more on Borromée Verreault consult:
http://www.encyclobec.ca/main.php?docid=142
The Verreault company website appears to be under construction, but it is available in English and French at:
http://www.verreaultnavigation.com/#!home/c1ct6