The Halterm container terminal in the south end of Halifax (100% owned by Maquarie Infrastructure Partners) received its two new super post-Panamax cranes in late August. They arrived aboard Zhen Hua 19 and were landed at pier 41 where they will be commissioned over the next few weeks. 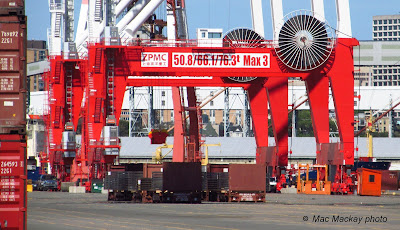 2. Essentially the same as the other pair of post-Panamax cranes, the new units are classed "Max 3", whereas the others are "Max 2".

A plan to move the old south end crane at pier 42 using Zhen Hua 19 was scrubbed when the bogey pins could not be dislodged. Instead the crane will be moved overland to pier 37 where it will be positioned adjacent to its sister crane, which according to sources, has been unserviceable for some time. The old cranes do not have the height or reach to service larger ships, but are still suitable for smaller ships, (should they be operational). 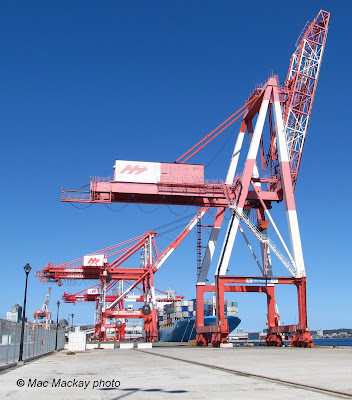 3. The old crane will be re-positioned at pier 36.

The crane manufacturers, Zenhua Port Machinery Corp (ZPMC, part of Shangai Zhenhua Heavy Industries Co Ltd), delivers its own cranes on a fleet of specially-built or rebuilt ships operated by Shanghai Zhenhua Shipping Co. Zhen Hua 19  was built in 1986 in  Taiwan as a the bulker Panamax Cosmos. It was renamed New Horizon in 1991 and in 2006 rebuilt as a heavy load carrier. http://www.zpmc.com/

4. The old crane was to be moved by Zhen Hua 19. My assistant shipspotter Heathcliffe was on the scene, but he reports that the move could not be made due to technical problems. 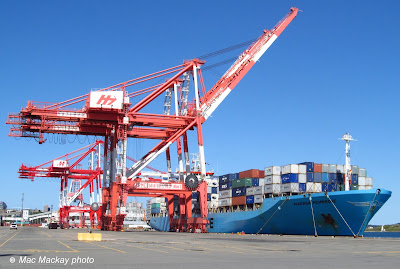 5. The current Max 2 post-Panamax cranes will soon be put to work on Maersk Pembroke early this afternoon.
6. Maersk Pembroke upbound on the St.Lawrence September 2 en route to Montreal, taken from my summer-time front porch. They were obviously not expecting heavy following seas on their transatlantic leg. Note the difference in deck load on inbound versus outbound, even before loading in Halifax.
(Due to the telephoto lens effect, the south shore of the river, which is twelve miles away at my location, appears much closer.)