The French cable ship Ile de Sein sailed this morning after five days in Halifax for cable transfer. The 13,978 gross ton ship was built in 2001 by Hyundai Mipo Dockyard in Ulsan, South Korea, and is one of a pair of hi-tech ships for fibre optic cable work. 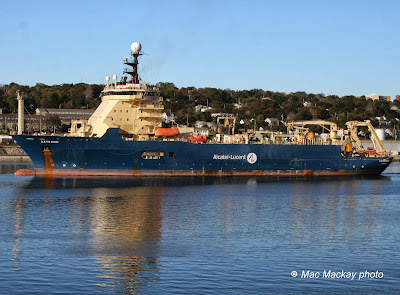 Although normally working in the north Atlantic and Mediterranean, the ship has recently completed a project in New Zealand. Its destination is now Algeciras, Spain.
The ship is named for an island off Finistère, one of the most westerly points of France. Sister Ile de Batz also gets its name from another Brittany island, off Roscoff. The latter ship has also visited Halifax and in 2004 laid a fibre optic cable from Gaspé to the Magdalen Islands.
As with most modern cable ships, it is designed to work over the stern, like an offshore supply boat. It is equipped with a gantry for working bottom plows and other submersibles and has double sheaves to allow it to bring both ends of a severed cable aboard. It also has an aft facing bridge, used when working stern-to. 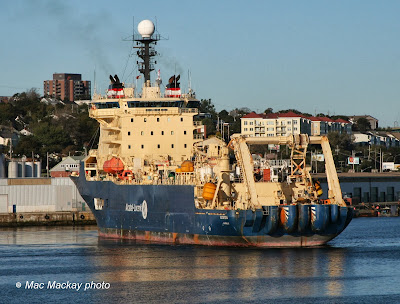 To allow Ile de Sein to sail, the traditional looking cable ship IT Intrepid moved off the dock to Bedford Basin - it is designed to work off both bow and stern, and has single sheaves at each end.