1. With the tug Atlantic Willow standing by, a pre-launch conference takes place between yard workers and harbour pilots. The stern of the next ship, A. LeBlanc is just visible behind them, on the left.

Today Halifax Shipyard added another safe launch to its growing list  when Corporal McLaren MMV floated into Halifax harbour for the first time.
The launch was conducted in slow stages - it was not the old fashioned run down the ways with a big splash!
The first stage was to slide* the ship down to the water's edge where a riding crew, including two harbour pilots, boarded the ship and checked it for seaworthiness. It was then allowed to slide a bit further into the water to "wet its feet" so to speak. This was really to permit a water tight integrity test, making sure that all through hull fittings were tight. Divers from Connors Diving then went down to release the cables that connect the ship to its cradle. The final stage was to allow the cradle to run out to its full length, and for the ship to float off. The whole process took roughly two hours. The new ship was then moved to pier 9B for final fitting out and trials.

2. Just before getting its feet wet for the first time, the ship is stopped on the ways to allow the riding crew and pilots to get aboard. At this point in the process, fog arrived with the incoming tide and socked in the Narrows.

Unlike previous occasions when two tugs towed the ship to pier 9, this time the work was done by one tug, Atlantic Willow, and Connor's dive boat Eastcom. The latter has shallow enough draft to work over the end of the launch way, which is not deep enough for the big tugs, even at high tide. A pair of outboard motor boats also assisted in the proceedings.
(As a new ship, its engines are not yet operational, nor its auxiliary generators, and it carries no fuel, so it is totally without power and cannot move on its own.) 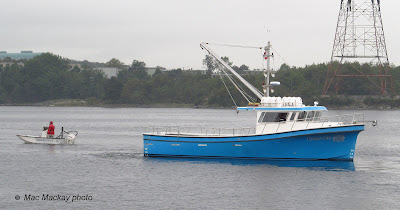 3. Eastcom has a stern line from the new ship, assisting it alongside pier 9B.

4. Corporal McLaren MMV shows off its attractive lines as it nears pier 9B. (The barely visible bow line leads off to the tug Atlantic Willow.)
5. The boat will undergo builders trials over the next month or so.

* Footnote:
To control the movement of the ship on the launch way, the luanch cradle is connected by a cable system to a large truck, heavily counter-weighted with concrete blocks. The truck's great weight (and brakes) are enough to keep the launch cradle (with ship aboard) stationary. When it is time for the ship to move, the truck releases its brakes and inches forward, until ordered to stop again. If it is necessary to pull the ship back up the launch way for any reason, the truck has enough power to pull it back. 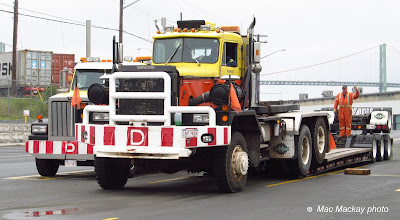 6. This is the truck- a very large, all-wheel drive Kenworth. Once the launch was completed, the counterweight body was removed and the truck was loaded aboard a trailer for the return trip to J.D.Irving Equipment. The Kenworth drwarfs the Western Star truck which will tow the trailer.
Posted by Mac at 8:11 PM