The Canadian Coast Guard Type 1100 navaids tender and light icebreaker Ann Harvey  arrived at the Bedford Institute after a refit in Shelburne. The ship was built at Halifax Shipyards  in 1987, when the yard was owned by Halifax-Dartmouth Industries Ltd. It was launched December 12, 1985 and commissioned into service July 17, 1987. 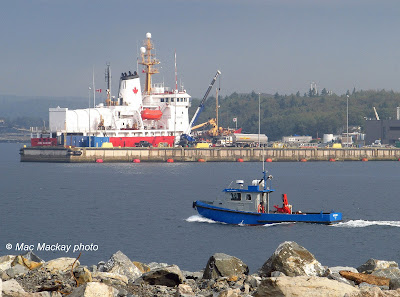 1. Ann Harvey at BIO this morning taking on stores and bunkers following refit. The fuel is being delivered by truck from Irving Oil. In the foreground the Halifax Port Authority's work boat Maintainer 1 is heading for Bedford Basin.

Under the current Coast Guard mandate the ship is classed as a high endurance, multi-task vessel, with a range of 8500 miles, and is based in St.John's. Its working area is usually between Cape Freels and St.Anthony, extending 200 miles off shore, with Search and Rescue responsibilities to the mid-Atlantic.
It is fitted with a 20 tonne derrick, double hangar for helicopters, and the usual fast rescue craft and landing craft. Propulsion is by means of  3-16 cylinder Alco/Bombardier MLW engines powering three electric generators and 2 electric motors driving twin fixed pitch screws. Total installed horsepower is 10,500 bhp, and effective power is 7100 shaft horsepower to the screws.
She has only occasionally called in Halifax over the years, the last being a short visit in November 2011 when filling in for CCGS Earl Grey for the opening of the lobster season.
Tenders were called in the spring for her refit which was to be between July 5 and August 5, but it would appear that the dates may have been altered or extended. 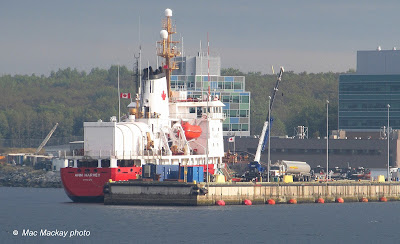 2. In the photo, just behind the ship, is the new Canadian Coast Guard regional office building.
Posted by Mac at 10:23 AM