The Placentia Bay Newfoundland pilot boat Atlantic Pilot sustained severe damage when it ran aground in the early hours of August 7, 2013 at Adam's Head, NL. The two persons aboard were not injured, but it required the services of the tug Placentia Hope to tow the boat off the shore. Once freed, sister boat Avalon Pilot towed the craft to Arnold's Cove for damage assessment.
A.F.Thériault & Son Ltd, of Meteghan, NS,  built both boats in 2007, and Atlantic Pilot was in Halifax in May of this year en route from a refit. 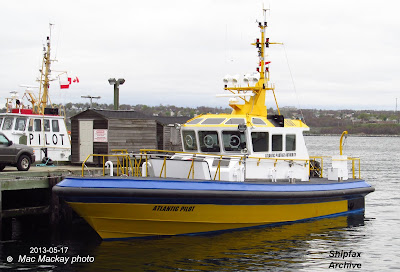 This is the second such accident in the area. On May 28, 2006 Placentia Pilot also ran aground in Placentia Bay. In that case the boat's rudder and props were badly damaged. The hull was holed in several places causing the boat to sink to deck level. Damage was so severe that it was declared a constructive total loss and sold. In that case operator fatigue was cited as the cause of the accident. There were also serious injuries to one crew member.

Interestingly, that boat returned to service as a pilot boat, but in the Strait of Canso. Superport Marine in Port Hawksbury, purchased the wreck and rebuilt it and returned it to service. Now renamed Strait Eagle, it continues to provide pilotage services under contract to the Atlantic Pilotage Authority. It was built originally by Hike Metal Products in Wheatley, ON in 2000.

Pilot boats in Placentia Bay and the Strait of Canso are operated by contractors, whereas in Halifax the boats are operated directly by the Atlantic Pilotage Authority.


2. The rebuilt Placentia Pilot now serves the Strait of Canso as Strait Eagle. Shown here with the smaller Strait Falcon.