CCGS ships and other doings at Halfax Shipyard


The Canadian Coast Guard Hero class patrol boat project continues at Halifax Shipyard. Corporal McLaren MMV, was rolled out June 26, and must be close to launch date by now. However on the Labour Day weekend A. LeBlanc was rolled out for paint and is now blocking the launch way.  It will have to be moved to permit the next launch. Meanwhile the remaining two vessels can be glimpsed (when the doors are open) in the building hall, although not yet fully assembled.

Complicating matters is the imminent demolition of the current module shop as part of the shipyard expansion and upgrade. It would seem that as the Heros are pushed out the south end of the building, the north end is being torn down.

Meanwhile the first two cribs have been sunk for the new pier face at pier 7 (which they will be calling pier 8.) McNally Construction is building the cribs a sub-contractor to Dexter/Municipal. 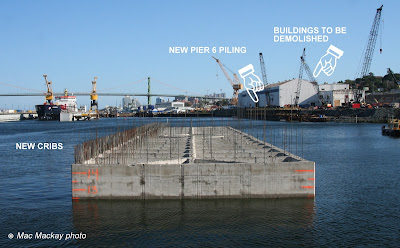 2. The first two cribs that will form the new pier 8. From this point to the shore (on the right) will be filled in to form the new land-level assembly area.

The cribs will form the edge of the new land level pre-launch area, where final assembly of ships will take place. The ships will then move south onto a launch barge (a floating drydock without walls) stationed at pier 6, and will be floated off, before moving to final fitting out piers. 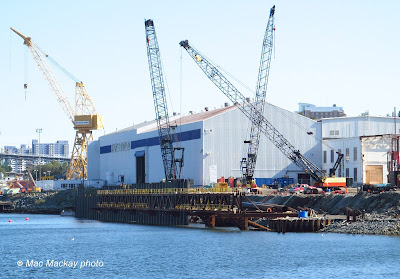 3. New tubular steel piles form the face of pier 6 where the launch barge will be stationed.
(The south wall of the new filled area, perpendicular to pier 6, will technically be pier 7, although that name will likely not be used.)