News that Oceanex Sanderling will be going into a two week refit at Halifax Shipyard in October comes as no surprise, since the ship has been running extraordinarily hard this year. While it attempted to keep up a twice a week schedule between Halifax and St.John's, it apparently put a great deal of strain on the work horse ship, resulting in some mechanical issues. It has since returned to a weekly run,
Meanwhile in Flensurg Germany, Oceanex's new ship Oceanex Connaigra has started sea trials and was officially registered in Canada on September 20.

If my calculations are correct the new ship will arrive in Canada about the time of Sanderling's refit. So far Oceanex has been coy about whether Connaigra will operate from Halifax or Montreal, and whether they will dispose of the elderly Cabot.
The Montreal - St.John's run is currently served by Oceanex Avalon (a straight container ship with no RoRo capability) and Cabot which used to serve Halifax and has often filled in here when Sanderling was in refit.

3. Oceanex Avalon at speed on the St.Lawrence River, is a container only ship, and would not be a likely caller in Halifax, where RoRo is a large portion of the cargo.

Oceanex has two options when the new ship arrives. One being to bring Cabot back from the Montreal run and the other to deploy the new ship here. We will have to wait and see. 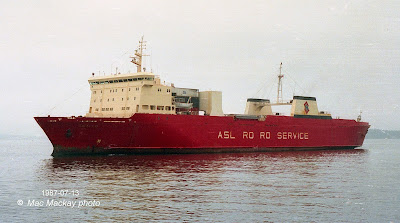 4. Present day Cabot served Halifax as Cavallo from 1982 to 1988 for Atlantic Searoute Ltd. It was lengthened in 1996 and runs from Montreal, but has been used to sub for Sanderling on the Halifax run.

I wonder how many times Oceanex has regretted that its predecessors sold Sanderling's sister ship?

5. Back in the days of Atlantic Searoute Ltd, there were two ships running from Halifax for a time- ASL Sanderling and her sister ship ASL Cygnus- shown here together, May 12, 1989.

Briefly, the sister ship, built as Rabenfels for DDG Hansa by Sasebo HI in Japan in 1977 was sold in 1981 to Lykes Bros of the US. It ran as Cygnus until 1989 when Atlantic Searoute Ltd purchased it and it became ASL Cygnus. Regrettably the ship was deemed a strategic asset to the US and could be commandeered when needed. That event took place in August 1990 when the US military chartered the ship for service in the Arabian Gulf. When it was returned in September 1991 it was put up for sale and acquired by Wilhelmsen to operate between the US and West Africa, again as a US ship, named  Thekwini . Finally in 1993 the US government bought the ship, renamed it Cape Taylor and placed in their ready reserve fleet in Mobile, AB.  In 2001 it was moved to Houston, TX where it is still maintained and operational.