Canadian shipbuilders have their knickers seriously knotted once again as they have come out strongly in favour of a review of the National Shipbuilding Procurement Strategy and strongly against possible foreign built tugs for the Canadian navy.

First, to be clear this is the Shipbuilding Association of Canada speaking out. Its aim is "to promote the interests of the Canadian shipbuilding ship repair and industrial marine industry". It has three classes of members: Shipyard Members (shipyards with more than 100 employees), Associate Shipyard Members (less than 100 employees) and  Associate Industry Members (generally equipment and material suppliers). The shipyard definition is loose enough to include repair and other facilities that do not actually build ships and never could. It also does not include Canada's largest shipbuilder, Irving Shipbuilding Inc (ISI).

So it is an industry promotion group, which seemingly does not approve of  non-members, such as ISI, getting a big chunk of the NSPS work. As I recall it was this same group that threw in the towel on commercial shipbuilding in Canada many years ago and called for the government of the day to get its act together on rebuilding the navy and Coast Guard. Which it did.


As costs rose (no surprise) the government started to cut back on the number of ships to be built, instead of several alternatives. So it is time to straighten out that mess. 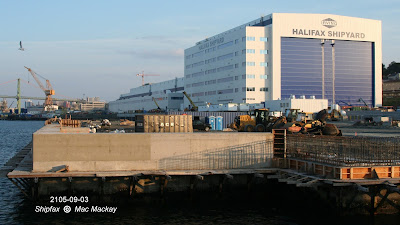 A new shipyard was needed in order to build the combat ships and arctic offshore patrol ships.

However the SAC seems to resent the fact that none of its members was able to build a warship, and the government had to step in and finance the building of a new yard to do the job. When it came down to it, the NSPS was only able to find two yards in all of Canada that had any amount of expertise and financial wherewithal (or courage) in the type of shipbuilding necessary to build naval and Coast Guard vessels, and even they needed huge upgrades to build the types of ships needed.

What was deemed a sunset uindustry was rescued from oblivion by the NSPS.

That the SAC is headed up by a retired Vice-Admiral is no coincidence. Naval shipbuilding is the only game in town, and the SAC members now want a bigger part of the pie. Sounds like a sour grape pie to me.

I welcome a review of the NSPS, but only if it can find the means to deliver the desired ships in a timely way and with cost control. No naval shipbuilding program in the world can currently deliver a ship to an unknown design, on time and based on ten year old budgets, so a dose of reality is needed.

As to the rumour that the navy may acquire tugs built overseas, that is an interesting speculation. Certainly there are Canadian yards that can build tugs for the Canadian navy, and they can do so at a 30% to 50% premium above what foreign yards can deliver. The SAC is right that building tugs offshore is no way to promote a Canadian shipbuilding industry. But do we need another heavily subsidized industry in this country? If it's not planes, then it is tugs, then what? Every non-competitive industry in the country will have its hands out.

As I have stated before in this blog and on Tugfax there are ways to deliver tugs to the Canadian navy in a sustainable and planned way, using Canadian shipbuilders. But if the navy insists on replacing all its tugs, all at once - again -  then I fear Canadian yards may be out of luck. Or they will end up assembling kits from foreign suppliers, and that is hardly a way to promote a sustainable Canadian industry.

It is interesting that Serco Denholm, which provides tug service to the Royal Navy has ordered a big tug to berth aircraft carriers at Portsmouth, and it is coming from the Netherland's Damen shipyard. An ART (advanced rotor tug with three azimuthing drives and three engines and 80 tonne bollard pull), it is a proprietary design, developed by the Canadian naval architecture firm of Robert Allen Ltd and built by the the world's dominant tug builder. 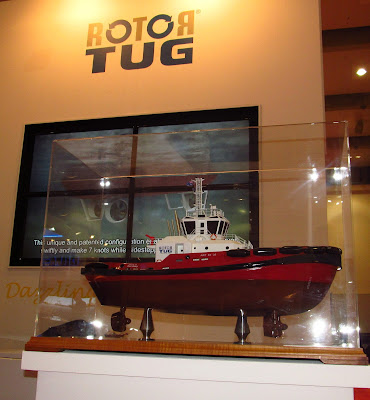 The Rotor tug with two drives forward and one aft is  highly maneuverable, with great redundancy and can operate on one, two or three engines as needed without sophisticated and costly secondary systems.

Although the Serco Denholm tug is much more powerful than what the Canadian navy needs, the ROTOR type would be very effective for the RCN in an available smaller version. The fact that it is a proprietary design of the Dutch tug operator Kotug, and built only under license, may explain why the rumour is out there about foreign build.