A military ceremony today recognized the 25th anniversary of the liberation of Kuwait. The Gulf War - it was then called the Persian Gulf, but is now more frequently called the Arabian Gulf, saw Canada participating in a war for the first time in a generation.
The RCN hastily updated three ships and in a major send off August 24, 1990 they sailed from Halifax. The waterfront was lined with spectators and well wishers and the harbour was choked with pleasure craft. The skies were also busy with numerous Sea Kings flying off.

HMCS Athabaskan, Terra Nova and Protecteur sailed from Halifax August 24, 1990. Note the bow gun has reappeared on Protecteur , It had been removed due to its exposed position when it was damaged by high seas. 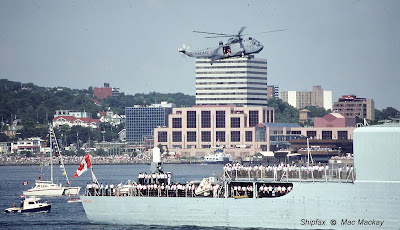