Patino was due to sail this morning

ESPS Patino was due to sail at 1000 this morning with other ships of the RCN to participate in exercises with the USN. That has now been changed to Wednesday afternoon.The two month charter from Spain will allow the RCN a degree of self-sufficiency which they would not have otherwise.

Patino arriving Friday, is built to a Dutch design.

Expect more arrangements like this in the future while the RCN attempts to keep maintain capabilities in replenishment at sea until Resolve is delivered in 2017.


That ship, the former container ship Asterix, is in conversion at Davie Quebec to be a temporary RCN supply ship for five years, with an option for a further five years! There was a temporary hiccup as the new Liberal government second guessed the Conservative decision to award the work to Davie as a single source, but work is under way again. 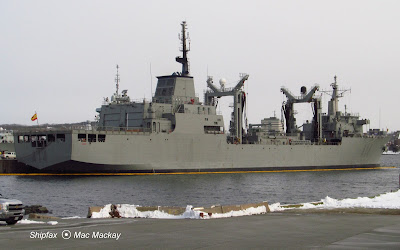 Work on the Queenston class supply ships may start at Seaspan Vancouver this year, or maybe next year as the Ship Procurement Program stumbles along from one crisis to another.
The first of those new ships, Queenston will not be delivered before 2021 at the earliest with Chateauguay following by a year or more. The usual time from keel laying to commissioning is five years, but could be longer for the first ship of its class. Since it is based on a German design, one could hope it will be simpler than starting from scratch.