It was blue ship day in Halifax today with two arrivals, both blue.

Blue Ship #1
Nanny arrived at noon time from Come-by-Chance, NL with another load for Wilson's Fuels, to be unloaded at pier 9. This is the third trip since November for the ship. 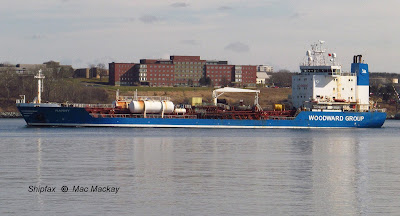 Built in 1993 by Hyundai, Ulsan the 6544 grt, 9170 dwt ice strengthened tanker made its first appearance here in 1998 under its original name Natalie Sif. It was renamed in 1999 when original owners KIL Shipping sold it to Alvtank Rederi of Sweden and renamed Nanny. When Woodward Group acquired the ship in 2008 they did not rename it, hence its unusual name. 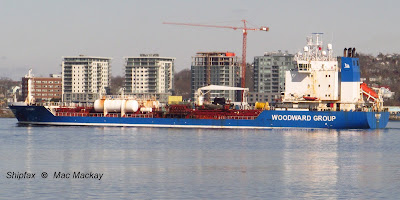 The fourth residential tower of the King's Wharf development, on the site of the old Dartmouth Marine Slips, forms the background as Nanny glides across the ferry track.

North Atlantic Petroleum, operators of the Come-by-Chance refinery, have recently begun to process US shale oil and crude from the White Rose field. Previously they only used foreign petroleum to meet demand for low sulphur fuel. They supplied Newfoundland's domestic needs for gasoline and furnace oil, but apparently have decided to expand to the mainland, with what I assume is furnace oil, but may also be gasoline and diesel.


Blue Ship #2
Later this afternoon the general cargo ship BBC Louisiana put in at pier 30-31. A member of the large BBC chartering fleet of Bockstiegel Reederei headquartered in Emden, Germany, it is one of twelve ships in its class. All measure 9618 grt, 12,763 dwt and carry two 150 tonne cranes than can combine for a 300 tonne lift.

BBC Louisiana appears to be in ballast, so may load some special cargo in Halifax. but has some machinery components to unload.

The ship was built in 2008 by Jiangdong Shipyard in Wuhu, China and flies the Antigua and Barbuda flag, with port of registry St.John's, Antigua. 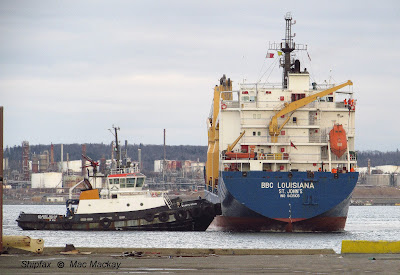 Atlantic Willow nudges the ship alongside at pier 30. 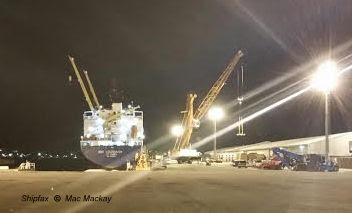