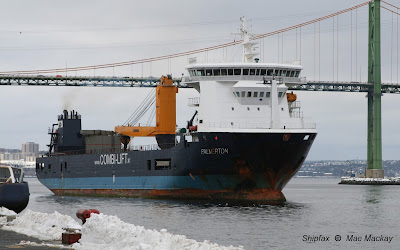 The heavy lift ship Palmerton unloaded its cargo of gas pipe at Pier 9C and sailed this afternoon. Its twin 450 tonne Liebherr cranes (which can combine for a 900 tonne lift) were not tested with this cargo, but its box shaped single hold was suitable for carrying these 40 foot long components.
Its utilitarian occupation is in contrast to its elegant superstructure, with a projecting lounge - which might be quite exciting in bad weather - and an almost full width wheelhouse with a walk around bridge. 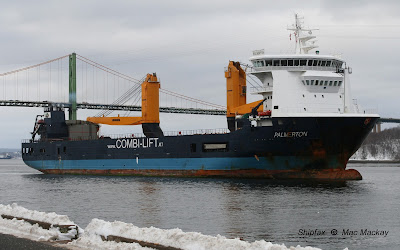 Built in 2009 by Taizhou Kouan Shipbuidling Co in Taizhou, China the 11,474 grt, 10,124 dwt ship is part of the Combi-Lift fleet of Harren+Partner Reederei GmbH of Bremen, Germany. The fleet consists of a variety of ships that include specialist heavy lift, oversize and floating cargoes.
See Harren-partner.de/en
The heavy lift business has its own web site at http://www.combi-lift.net/home.html 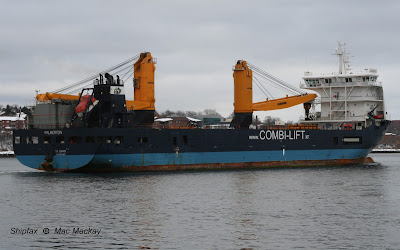 Palmerton carries pontoons which can be floated alongside the ship as counterweights while lifting heavy cargoes.They are the gray painted objects stowed aft athwart the funnel. 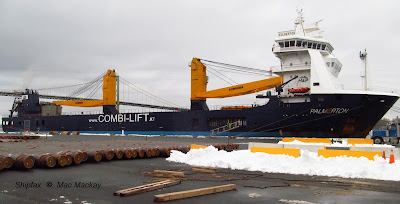 Trucks started to take the pipe off to the finishing plant in Dartmouth even before the ship sailed. It arrived yesterday following a heavy snow fall, but the pier was cleared off for laying out the pipe and unloading went swiftly.