Nordana Sky is still "listed" on the Canadian Registry, and was operated by Transport Desgagnés during 2015 on charter. It may have been reflagged since it returned to Europe, but was due back in Canada again next summer. A frequent caller in Pugwash, NS to load salt it also visited a number of Atlantic Canada and Quebec ports last year. 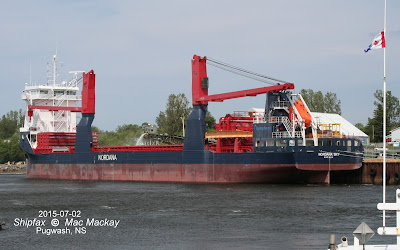 It had departed from St.Petersburg headed for the Suez Canal when the incident occurred and has now been detained. Damage was reported to both ships, so there will be a trip to a shipyard in the offing.

Nordana Sky was built by the Ferus Smit Shipyard in Leer, Germany in 2015. Soon after delivery in February 2015 as Symphony Sky, and under the Singapore flag, it was chartered  to Nordana, registered in the Netherlands and renamed. It arrived in Quebec City May 15, 2015 and was reflagged to Canada May 20. Its current status as "listed" versus "registered in Canada" is one I have never seen before, but I assume it acknowledges a continuing management by Desgagnés, but a return to the Netherlands flag.