With the arrival of Slotergracht this morning there are two Spleithoff "S" class ships in port at the same time. By this time the first ship Singelgracht would have been on its way, but it is still submitting to the attentions of Dominion Diving, whose boat was awaiting for it on arrival and has been alongside ever since.Some underwater repair may be going on, and if so it is not visible to this set of eyes.

The versatile "S" series ships, as previously reported can carry all sorts of cargo, and have cranes and heavy hatch covers to accommodate odd deck cargoes.See February 22 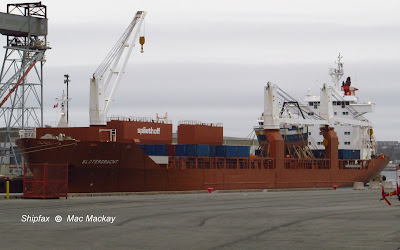 Slotergracht is living up to its reputation by carrying the stern trawler O-156. The 65 foot compiste aluminum / reinforced plastic boat was built in 2003 by TWL Enterprises Ltd of Trinity, NL as Fundy Commander. It fished out of southwestern Nova Scotia primarily from Digby until 2009.

At that time a pair of Dutch brothers from Urk, Netherlands bought the boat and after a three week Atlantic crossing at a blistering 8.5 knots, reached their new home port of Ostend, Belgium. After refitting the boat to European standards, they renamed it O-156 Maaretje-Alte and went fishing off Denmark, landing some of their catch in the Netherlands and some in Ostend. (The O in the boat's name stands for Ostend.) 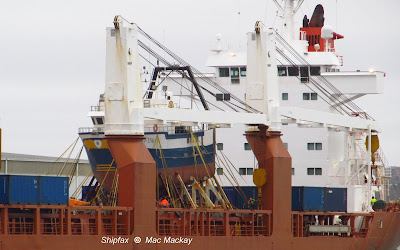 In June of 2015 the boat was reported en route to Horta in the Azores, and seems to have remained there. On September 29 it was re-registered in Canada (in Yarmouth, NS) and renamed O-156 and classed as a pleasure craft. The new owner is a numbered company based in Goulds, NL.
Spliethoff's offer yacht transport as part of their regular business,but this boat is pure working trawler, although reportedly finished inside to a very high quality.
If it is to be unloaded in Halifax, there will be a wait as two days of high winds and driving rain are predicted.