Slotergracht (continued) - we have lift off

Despite hideous weather conditions of driving rain and gusty high winds, the crew of Slotergracht were able to lift off the trawler O-156 this morning.
However lift on of the high speed catamaran tour boat Famille Dufour II had not taken place by late afternoon as the conditions persisted. That may happen tomorrow.

As reported yesterday, O-156 arrived on deck from Europe, returning from seven years fishing out of Ostend Belgium. Now at pier 30, it will be handed over the new owners in Goulds, NL. 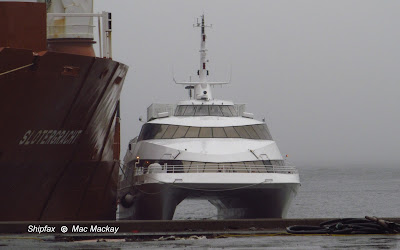 Famille Dufour II arrived here in tow of the Point Vim on January 9 from Tadoussac, QC. Since arriving  the Croisières Le Montréalais banners have been painted over in preparation for a new career running between Vancouver and Victoria, BC. See http://shipfax.blogspot.ca/2016/01/famille-dufour-ii-slow-speed-to-halifax.html 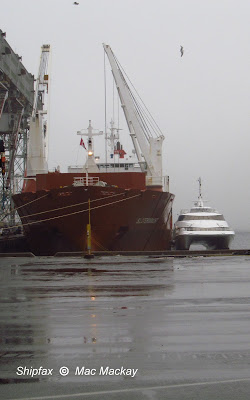 It has been lying at Connor's Diving's jetty at the Royal Nova Scotia Yacht Squadron, where it was very difficult to photograph. (February 13 photo when we still has snow). 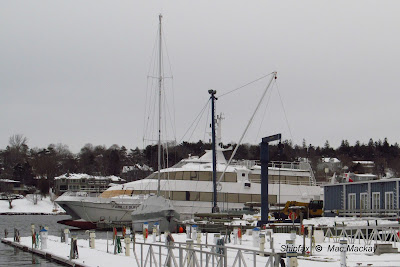 This morning it moved under its own power to pier 27.