Are there storm clouds ahead for ZIM

With the most recent container line takeover, reducing the number of major players on the industry from 11 to 10, questions swirl around the future of ZIM. 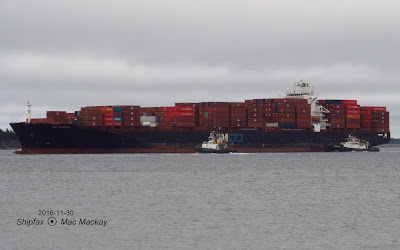 ZIM Piraeus arrives on Wednesday, one of two ZIM callers each week in Halifax.

Yesterday A.P.Moller-Maersk announced the purchase of Hamburg Sud from the Oetker family, pushing Maersk's share of the world container business up to over 18%. At the beginning of the decade there were 20 global container lines, now there are only 10, leaving ZIM as the sole unaffiliated player in the tempestuous industry.


The recent epidemic of mergers, takeovers and alliances (several of which, including the Hamburg-Sud one, will not come into effect until well into 2017) is putting even more pressure on beleaguered smaller operators. There is even talk of a desperation merger of OOCL and Yang Ming - even though a Hong Kong - Taiwan union was unthinkable until recently, or even a sell off to the other majors. Analysts reckon both lines are about half the size needed to survive as global players.
HAPAG-Lloyd also received approval from the EU this week for its purchase of USAC.


ZIM is even smaller*, so must be under tremendous pressure.


A major Port of Halifax customer, ZIM has been a steady presence here for decades, but like all container lines it is suffering from the industry over capacity and the rate wars over shrinking cargo volume. ZIM has been able to survive thanks to deep pocketed investors, and is denying the inevitable rumours of a sell off.