High winds, snow and frigid temperatures descended on Halifax and played minor havoc with some shipping plans in Halifax and throughout Atlantic Canada.

The chemical tanker Oceanic Crimson made its way from Saint John, NB to Halifax on Friday despite conditions, although it took on a coating of frozen spray on the exposed pipework. 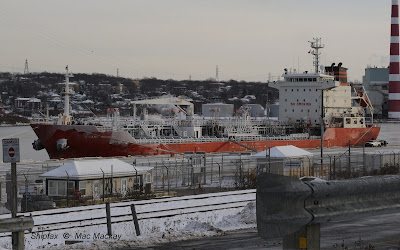 Iced like a cake, Oceanic Crimson lies at pier 9c this morning.

The ship tied up at pier 9C for some minor repairs which are due to be completed today.
The ship was built by one of South Korea's small scale shipyards, Jinse, in Pusan in 2008. The ship measures 8505 grt, 13,275 dwt and is owned by Panoceanic Bulk Carriers Ltd, headquartered in Guernsey, Channel Islands. Its day to day activities are handled by ASP Ship Management of Singapore and the ship is registered in Panama.

A much larger tanker, also from Saint John, was due yesterday but held off for a full day and put in this morning. Silia T is here for bunkers, but may be planning a linger stay since it was sent to anchor in Bedford Basin. Big ship like this usually come only as far as Number 1 anchorage, but that area is reserved for short stays. 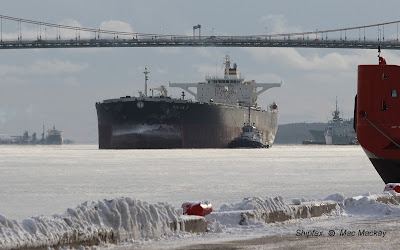 Silia T clears the Angus L. Macdonald bridge with Atlasntic Oak on the flank.
In the left background the tanker Latgale at Imperial Oil, and the right background ships of the RCN. In the right foreground Atlantic Griffon completing for Atlantic Towing Ltd at Halifax Shipyard.
Sun is finally dissolving the last of the sea smoke, but there is still a thin layer on the water in -13C air. 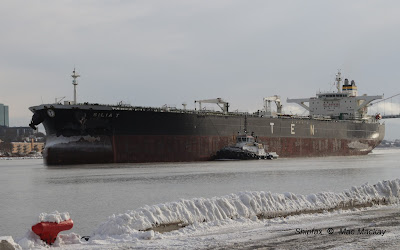 The ship unloaded its cargo of crude oil in Saint John, so is very light. It also sports a frozen spray moustache over its bulbous bow. 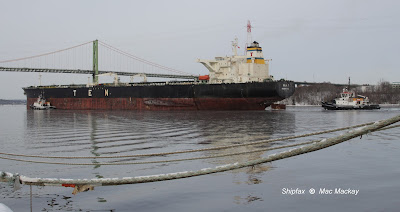 It took a 28mm wide angle setting to get all of the ship in as it makes its way toward the A. Murray MacKay bridge. 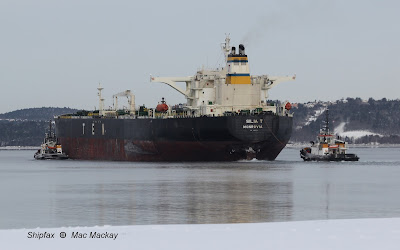 Once into Bedford Basin, it heads north for the anchorage.
(Photo taken at 1030 hrs AST - see below)

Flying the Liberian flag, the ship is operated by Tsakos Columbia Shipmanagement of Athens Greece. It was built in 2002 by Samho Heavy Industries of Samho, South Korea. Its measurements are 84,586 grt, 164,286 dwt.
The tugs Atlantic Oak and Atlantic Bear escorted the ship from the lower harbour through the Narrows to the Basin. [ see also Tugfax]

Another ship scheduled to arrive last evening delayed its arrival until this morning. Atlantic Project II  anchored in Bedford Basin partly blanketed by arctic sea smoke, as the crew worked to free up frozen containers on deck. It moved to Fairview Cove later, but the battle was not over. Normally it is only in port for a couple of hours, but it is not scheduled to sail until this evening. 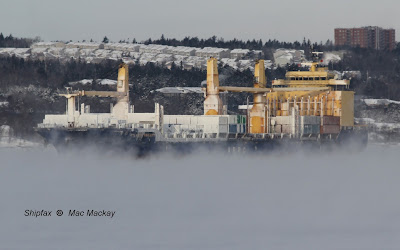 The sun is beginning to burn off the sea smoke around Atlantic Project II in Bedford Basin.
In an hour or so the sea smoke will be gone.
(Photo taken at 0900 AST)

Atlantic Project II sails for Atlantic RoRo Carriers running between Russia and Texas with intermediate stops on demand. It was last here in May, and is likely here to discharge the same cargo, a radioactive commodity, for reprocessing.

ARRC is replacing the Astrakhan type ConRo ships that the line was famous for. One of those, Atlantic Navigator, has just been sold for scrap to Bangladesh. The former Lykes Energizer-04, Thorsriver-00, Evervital-97, Kovrov-97, was built in 1992 by Kvaerner Warnowerft Gmbh and was last here in March.
See the posts on Astrakhan ships here:
http://shipfax.blogspot.ca/2015/01/astrakhan-loros.html
http://shipfax.blogspot.ca/2016/01/back-in-business.html
Posted by Mac at 6:43 PM