CBC News New Brunswick is reporting on what appears to be the end of the line for a ferry that once served Grand Manan Island. See the report and short video clip:
http://www.cbc.ca/news/canada/new-brunswick/grand-manan-ferry-panama-fritz-breckner-1.3897918

Now named Sanblas the former Grand Manan has been aground in Panama since July 17 and appears to be there to stay. The uninsured ship ran onto rocks during an unwise salvage attempt on another vessel. When one engine stalled it could not be restarted fast enough to save the ferry from the rocks, and there it sits, its engine room filled with water and its owner unable to save it. 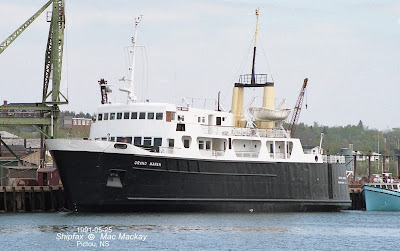 Grand Manan fresh off the slip in Pictou, NS after its spring refit in 1991.

Built in 1965 by Saint John Dry Dock and Shipbuilding, the 1443 grt car and passenger feerry served J.D.Irving Ltd, CN Marine, and the New Brunswick Minister of Transportation during its 46 year career, always running between Black's Harbour and Grand Manan.

It carried 25 cars, 100 passengers and was originally powered by a pair of 8 cylinder Blackstone engines. Those were replaced vy 12 cylinder Caterpillars in about the year 2000.

In 1991 the ship was renamed Grand Manan IV to free the name for another ship, but reverted to its original name in 1993. It was due to retire after it last trip September 12, 2010, but was kept in reserve for a time. That was fortunate since the new ferry Grand Manan Adventure had some serious teething problems and the Grand Manan re-entered temporary service in May 2011.

Later in the year it was sold to one Fritz Breckner for use between Panama and Columbia. He paid $200,000 and says he spent another $800,000 on it for a new ferry route around the Darien Gap, but could not get the needed permits from the government of Panama.   The owner was using it as a liveaboard when he unwisely attempted to salvage one of his catamarans, which was also lost in the storm. 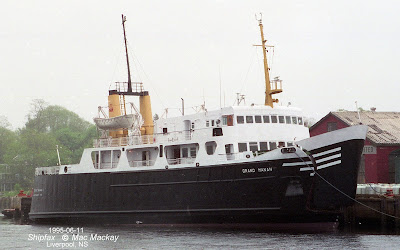 In another refit, this one in Liverpool in 1995, the ship has its bow door ajar. It has added some chevrons and the New Brunswick logo on its funnels.